Which media size and weight can be used? 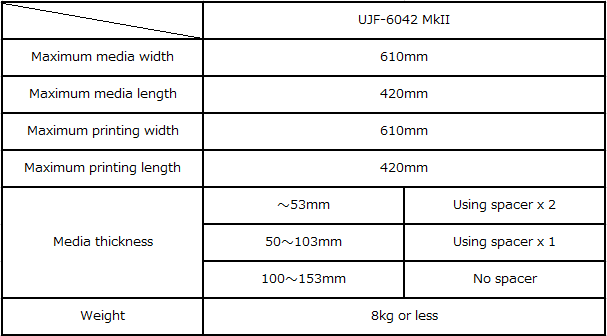 Extension and shrinkage of the media
Do not use the media of the sheet form shortly after the package was opened. The media could extend or shrink depending on the temperature and humidity inside the room. For more than 30 minutes after opening of the package, the media has to be exposed to the ambient air of the location where it is used.

Warping of the media
As for the media of the sheet form, use the flat one, or the one warping downward (the one with floating central part when placed the printing surface facing upward). Store the media liable to be warped on the slightly smaller platform or palette so that it may warp downward.

Other precautions
a. Curled media that cannot be absorbed or the media that misaligns when the table is moved may not be used. Before using, fix the media with adhesive tape, etc.
b. Do not use the media that will generate warping or deformation.

If you're still having problems, please contact us through our inquiry form.

We would like to hear from you! Please take a few minutes to complete this survey