Viaualization and larger size is the trend in the signage industry.
The new large format size printer, JV5, is the key. 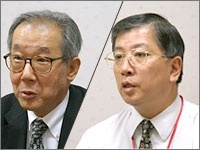 【The wave of digitalization came earlier than expcted】
Loyal color is establised in 1964. They focused on the possibility of the demand expansion of color picture and the industry of leisure and information. By introucing excellent technology and machine of Kodak, they started processing laboratory specializing in Kodak's color film. Since their foundation, they steadily expanded their sales channel, and now they are the leading company which has business base around Kanto and Koshinetsu area (The middle part of Japan).

They started digitalization business in 1991. Before that time, they had been created the manuscript by masking the illustration, picture, and letters into the negative, but they introduced Kodak's Premier which digitally output the data on the negative. The operation by the combination of the analog and digital changed into DTP by Macintosh, and the manual operation such as masking is replaced with the digital method by computer.

After that, in 1996, they introduced Scotch print system being in the first in the industry. In that year, the digitalization in the company started. After two year passed, they introduced the inkjet printer made in America, and created display panel for the indoor use. Mr. Yoshida, the executive manager and division director of commercial imaging, talked about their history of their digitalization like as follows.。

Four years ago, the company introduced another JV3 just after they purchased JV3. Last year, they introduced JV5 with the width of 1600mm. At the same time, they procured two cutting plotters of CG-130FX, and they actively undertake the creation of the booth for the exhibition. 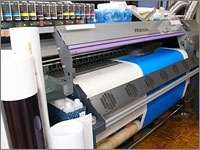 "The print speed and the image quality of JV3 is satisfying, and its affordable price was attractive. The only problem was the odor which is unique to the solvent ink. The working environment became worse. When we were thinking about the solution, the odorless ink, SS2 ink, was developed. We had been using the overseas printers, but everytime a new system was developed, the system was not compatible to the conventional printers. 'Please abandon the old printer, and buy a new one.' This was their way of sales. However, Mimaki was different. The newly developed ink was loadable to the conventional machines without any modification. This user-oriented attitude is special to Mimaki we think."

【Intorduced JV5-320S immediately after its was launched. It is a Indispensable mahcine in the workplace】
Their Sign & Display business can be classified into the indoor (store) decoration and the outdoor signage. Mainly, for the indoor decoration, they use printers other than Mimaki. For the outdoor signage, they use Mimaki's JV3 and JV5. Mr. Takahashi who is the Assistant Manager of the production section talked about the current signage industry as follows.

"In 1998, after Nagano Olympics, the signage in Japan became visualized using pictures, and also became larger than ever. These days, the order of the wrapping of the bus or the building is increased."

In summer of 2007, they introduced the grand format inkjet printer, JV5-320S, right after it was launched. The large-sized machine with the high image quality and the fast print speed is in full operation, and now JV5 is vital to them. 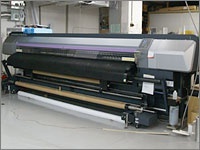 In spite of the large printer, the print speed is really fast. For example, it takes three hours to print 12 square meter by JV3-250, JV5-320S finish printing in 30 minutes. If we think that the "Speed = Cost", the time cost cannot be compared to JV3-250. Since the image quality is fine, the large signage, which is seen close such as advertisement set at the concourse, can be printed by JV5-320S.

"The performance of the printer improves quickly, and the needs of the client becomes the more diversified. In this age, one can lose jobs who thinks 'If we wait a little more, the more better machine will be launched.' No matter how the equipment investiment is a little bit high, we should intorduced the state-of-art technology so that we can win business. We believe that the looking beyond the present and predicting the future trend is the key to survive in the signage industry."