Challenges
Improvements
Although we have outsourced the manufacturing of button badges and pasteboards to subcontractors (for offset printing and punching processes), it took a lot of cost for us to deal with work operation of a small-lot production.
Introduction of CFL-605RT and a laser printer enables us to realize reduction of manufacturing cost by a factor of 10 and a significant reduction in delivery time. Furthermore, our scale of business is expanding by introducing UJF-6042MkII and producing acrylic key holders in-house.

Our in-house production has decreased the cost to one-tenth of the subcontracting to outsourcees. 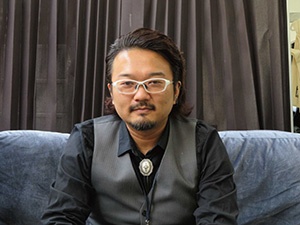 Conclusive factor of adoption of CFL-605RT

Mr. Wataru Narato is the third president of the company since its foundation. Its founder is the current President Narato's grandfather, and he started its business as design office as prescribed in its company name.
Because the founder became independent of a department store employee, its key business activity after its inception was fabrication of packaging materials used at the counter of retail stores, such as wrapping paper of a department store, a box of confectionery and tea. President Narato says, "There must be something you have seen before."

The transition to novelty goods business came around 1998 after the economic bubble burst when the former President (Narato's father) was on active service then. Since those customers who would like to demand its own design and goods themselves were on the increase, the company outsourced their production to subcontractors and delivered the finished goods to its customers to comply with such demands. Then, the company received the orders of a mug or a T-shirt as well as button badges. As there were transactions with major company’s retail shops, such as Tokyu Hands, total order volume increased rapidly.

As President Narato looks back, he says, "Since the Internet was not developed those days as now, our business dealings were mainly with neighboring companies and BtoB was in the mainstream." He became the president of the company in 2014, and it was reorganized into a business entity in 2016, while at the same time its website was modified. As a result, sales of its button badges increased via the Internet.

Our in-house production has contributed to decrease in the cost to one-tenth as compared to before. 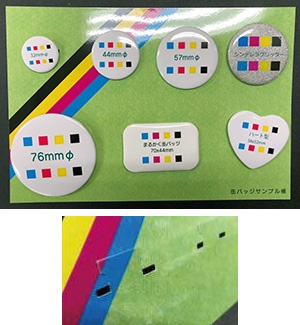 Making "a suspension hole" of pasteboard by means of CFL-605RT

Adoption of "CFL-605RT" took place in 2015.
Its intended use is to cut "pasteboards" used for delivery and distribution of button badges. Generally, lots of companies making button badges perform printing and embossed finishing to produce button badges. Although other work operations of processing are divided among operators, the Narato Design performs all the work operations including packaging and shipment consistently.

Most of its button badges are printed with animation characters, pop idols and sport players, and they are sold in the shop on pasteboards which are suspended from fixtures and fittings. For this reason, each pasteboard needs to be provided with "suspension hole" to hang them, which are cut by "CFL-605RT."

Till then, offset printing was carried out by subcontractors, while cut-off processing to align with such suspension hole was performed by making a cutting die (blade type). The cost of cutting-die table was 30,000 yen or so, the charge for offset printing was about 100,000 yen, and the required number of sheets for pasteboards was 200 to 300, whereas "such number of sheets was sometimes 100 or so without repeat order". This fact made us think occasionally "It does not offset the expenses". As a result of adoption of "CFL-605RT" and a laser printer, as well as of creating of cutting work flow from digital printing, the cost of pasteboards has declined to about 1/10 as compared to before.

The main factors to adopt this equipment are its "size" and "price." 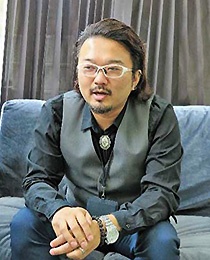 I fell in love with CFL-605RT at first sight, said President Narato.

His conclusive factor to adopt this equipment is its "size" and "price." When President Narato considered installing some equipment in the Tokyo main office of those days, he encountered "CFL-605RT." This equipment is compact in size as its footprint is 1,320 (W) x 1,045mm (D), and its standard price is below 2 million yen which is 1,998,000 yen (including tax).

President Narato says, "It was conclusive factor for us to adopt this equipment because it is equipped with a vibrating blade. First of all, because we traditionally used a roll-type cutting plotter produced by Mimaki Engineering Co., Ltd. (Mimaki), one reason to adopt that equipment was easy-to-use for us. When I visited a trade show for a different business, I fell in love with it at first sight as soon as I saw it at Mimaki's booth." 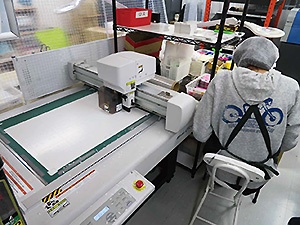 Furthermore, in-house production also realized a signification reduction in delivery time. Although it had taken about one week in the subcontracting to outsourcees from submission of a manuscript to correction and the completion of printing, a series of such tasks can now be completed on the same day at the earliest, and most of them will be finished by the next day. Currently, we can afford to deal with such a request that has to be completed by the next day for small quantity production of samples, for example.

The company president himself engages in data processing and accepts about 20 orders a day, while at the same time fabrication of pasteboards is performed. In the meantime, work operations are completed smoothly without any delay. Believe it or not, we can now deal with a highly tight schedule to deliver 10,000 pieces in one week to our customer.

In the operation of "CFL-605RT", performing a rough alignment and a cut starting operation enables a sensor to read a register mark and to activate automatic cutting operation. For this reason, it is said that one operation can operate "CFL-605RT", and perform other work operations, such as operation of a laser cutter and finishing work of commodities, which leads to more efficient work than before. Moreover, since printing performance and cutting quality can also be performed in-house, its work operation is easier to be done and the quality is also improved.

The pasteboards are what are directly associated with sales volume. Since those who look at a pasteboard are the fans of the relevant animation and idol, while their demand for quality is severe, "We are able to meet their demands firmly,” said President Narato.

With regard to the maintenance service of Mimaki, "We can cope with it only by asking a call center most of the time. In the event of a big trouble, he also says that there is sense of security since Mimaki's maintenance service becomes available by the next day." 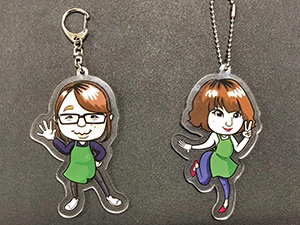 Acrylic key holders manufactured by Narato Printing onto them are performed by Mimaki's UV printer "UJF-6042MkII."

As to the Mimaki's products, "UJF-6042MkII" of UV hardening type ink-jet printer was introduced for the first time in the winter of 2016, and thereby we have succeeded in in-house production of acrylic key holders or the like. Now, we have more this printer, and six units of them in total are currently in operation at our Tokyo and Fukuoka factories. We are adopting more of such printer, with a higher degree of its reliability.

President Narato talks about his outlook by saying, "demand for character goods is to be on further increase. I would like to increase the number of equipment further from now on, and to satisfy demand in the future." 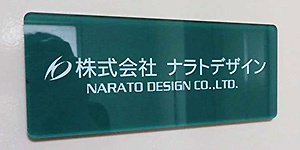