The quality of the color proof is the core of the operation.
Persue the image quality which is almost like the gravure printing. 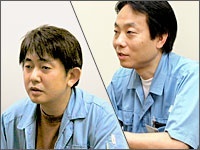 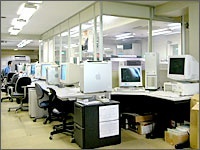 【Respond to the digital age as quiclly as possible】
In 1965, their business started with the gravure plate making. After that, they established a metal plating factory and a picture factory. In 1970, The three sections of plate making, metal plating, and picture were integrated into a general factory, and that led to the establishment of Towa Process.

In line with the high economic growth, the demand of the gravure printng and plate making became complicated and sophisticated. Then, the digitalization of all the operations was the theme in the industry. Towa Process predicted the advent of the digital era, and readily started DTP, filmless plate making, and unattended plate making by automization. The headquarters built in 1997 was the result of the assimilation of those attempts, and function as the core of the digitalization, systemization, and networking of the operations.

【The unprecedented proof is accomplished】
The strong point of the company is that, from the small cigarette filter to the big wall paper, they deal with any kind of the paper with any size, which the gravure printing can support. Their main operation is the plate (cylinder) making which is used for the package printing. At the front desk of the headquarters, many samples of the package which can be seen in daily life are exhibited.
On December, 2005, the system section introduced "UJF-605R" which is able to print on the soft packaging film. The printer is now installed in the pre press section which handles the pre-treatment.

"How to have the close image quality with the gravure printing on color proof. This is a crucial point for our operation. Making the printed color proof directly to the target color, the quick launch of the new product becomes possible allowing clients to do their work speedy. In the age that the product cycle is fast, the quality of the color and the quick response is essential. Being in this situation, UJF-605R is in full operation." Mr. Obata said.
The unprecedented proof is acheived by the digital direct printing on the soft package film, and the spot color proof printing with high definition and high image quality. 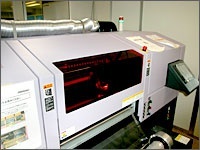 【By only comitting to the quality of the color】
Mr Takayama, the chief in the system section, talked about the feature of the UJF-605R from the professional standpoint of color.

"UJF-605R" produces the quality like the gravure printing, so it is easy to check the trapping which is unique to the gravure printing. Also, the color of the UV ink is satisfactory. Since a wider range of the expression is possible by taking advantage of the white ink, the printed sample can be used for the target color. After introducing UJF-605R, we received high acclaim from clients, and having the same image with the client became easier.

The color and fineness of the product sold at stores are directly connected to the image of the product, and have a huge effect on the profit. This is even more the case for food products. The quality of the color is one of the most important and sensitive part for the clients. Since the process of having a common image became faster by UJF-605R, the customer satisfaction increased significantly.

"From a stand point of a professional of the color, it will be great that the more high definition in the detailed point is achieved. If the fineness and sharpness of the gradation becomes the more better, there will be nothing to complain of. This is because the requests and order from the clients is getting diversified and advanced, and we must offer the higher quality produts than the clients demands. As a staff, I expect the advancement of Mimaki's inkjet technology."

Towa Process who has pursued "Accuracy, Delivery date, Economic efficiency" since its foundation, have been engaged in the gravure printing and plate making no matter how the time changes. It is obvious that what have supported their business is the staff's watchful eyes on the printed samples.